Home » Blog » Continuous Integration: What Is It and How Is It Done?

Continuous Integration: What Is It and How Is It Done? 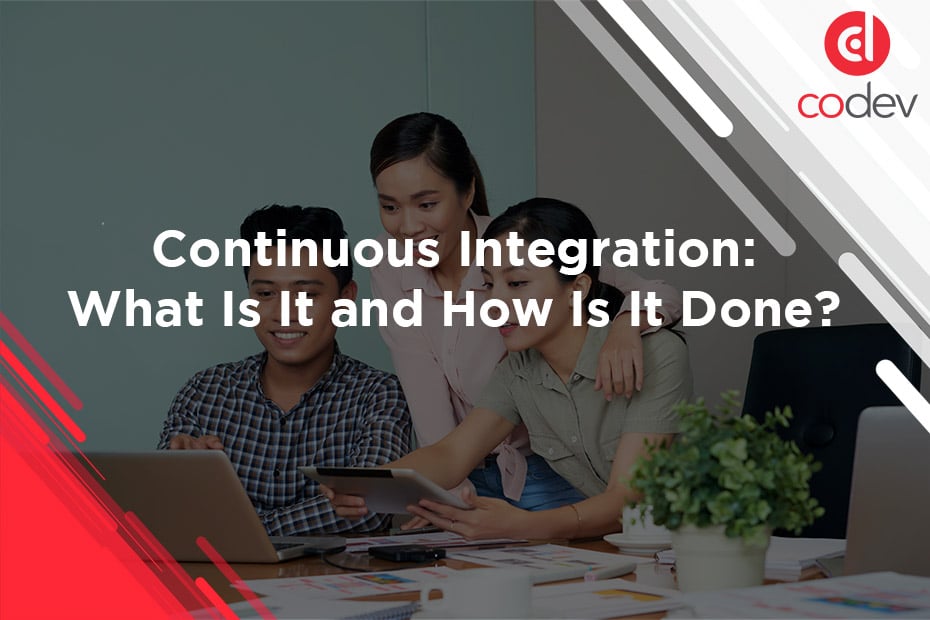 Developing software can be immensely rewarding, but at the same time it can also be terribly chaotic.

In any software development project there are numerous interconnected elements to build, control, and consider, as well as various areas and people whose roles and responsibilities overlap with each other. Such has caused many development teams to grapple with a slew of issues.

But there is a way to untangle such a mess: Continuous Integration.

Continuous Integration is a coding philosophy and set of practices that drive development teams to implement small code changes, and frequently merge such changes into a shared version control repository. It is a DevOps best practice that allows dev teams to more frequently and reliably deliver code changes.

Why Go with CI?

You can start to see how this would cause problems. With several developers submitting changed code, the copy eventually ceases to reflect the original repository code. As well as changing the code, developers may be adding new code, libraries, and other resources that create dependencies, and consequently potential conflicts. The longer developers work on a branch before merging, the more changes may occur in the repository. When they do decide to submit code to the repository, they must first make sure to update their code according to the changes made to the repository since they took their copy. The more changes there are, the more work developers must do before they can submit their changes.

With all these going on, the risk of multiple integration conflicts is high, and the time it takes to integrate changes greatly exceeds the time it took to make changes to the original code. Because of this, developers find it difficult to ascertain the time of delivery on feature requests. Code gets released at a much slower pace with a higher risk of failure, and these risks only grow as the size of the team and the codebase increase.

And the problems don’t end there. Developers must manually coordinate and communicate when they contribute code, not only to each other but to operations and the rest of the organization since many others may be affected by the changes they made. If you have an offshore software development team or outsource software development, you could have communication gaps here due to time and location differences between your organization’s teams. All these result in time costs, communication overhead, and unnecessary bureaucratic costs.

When applied successfully, CI effectively solves all of these issues. Essentially, it is as its name suggests: the continuous integration of code changes from various contributors to one single software project. CI allows software developers to work on features independently and in parallel, and once done they can quickly and independently merge these features to the end product.

With CI you have a consistent integration process in place, which leads developers to commit code changes more often. Defects and other software quality issues are detected more easily due to the smaller size of code submitted, and the chances of developers working on the same code are slim. Overall, the result is better collaboration and software quality.

Establishing CI entails several parts and steps. It starts with a version control system or VCS. Some of the most popular VCS are Git, Subversion, and Mercurial. Along with the VCS, a version control hosting platform is needed. Examples of these are Github and Bitbucket, which already have features and support for CI.

Once version control is set up, integration approval steps are added. Probably the most important among these steps is to add automated tests to the project. This will require the installation of a testing framework, and test code and test cases which are to be written by the developers. There are also other approval mechanisms you can use, such as code style formatters and syntax checkers. Some teams use feature toggles or feature flags, which are configuration mechanisms that can turn features and code on or off during run time. This can be useful for wrapping and turning off features that are still under development. Other teams opt for version control branching, which uses a branching strategy to define protocols for merging new code into standard branches for development, testing, and production. This approach however, can be difficult to manage if there are a number of different features being developed at the same time.

Once the version control system has been set up and merge approval steps are in place, CI is officially established.

Achieving CI successfully also requires the application of best practices. These include:

As you may have already surmised, CI offers plenty of benefits. Among them are:

Continuous integration is only the first phase of an automated software release pipeline, which includes continuous delivery (CD) and continuous deployment. Together, these ensure that developers are able to push changes frequently without issues and with greater stability. Any development team looking to scale and/or improve their current operations would do well to implement a CI/CD pipeline, but must be sure to reach a consensus regarding the right approaches for their business and technologies so CI/CD practices can be applied consistently.