Home » Blog » What Is Modern Testing? A Look at the Evolution of QA

What Is Modern Testing? A Look at the Evolution of QA 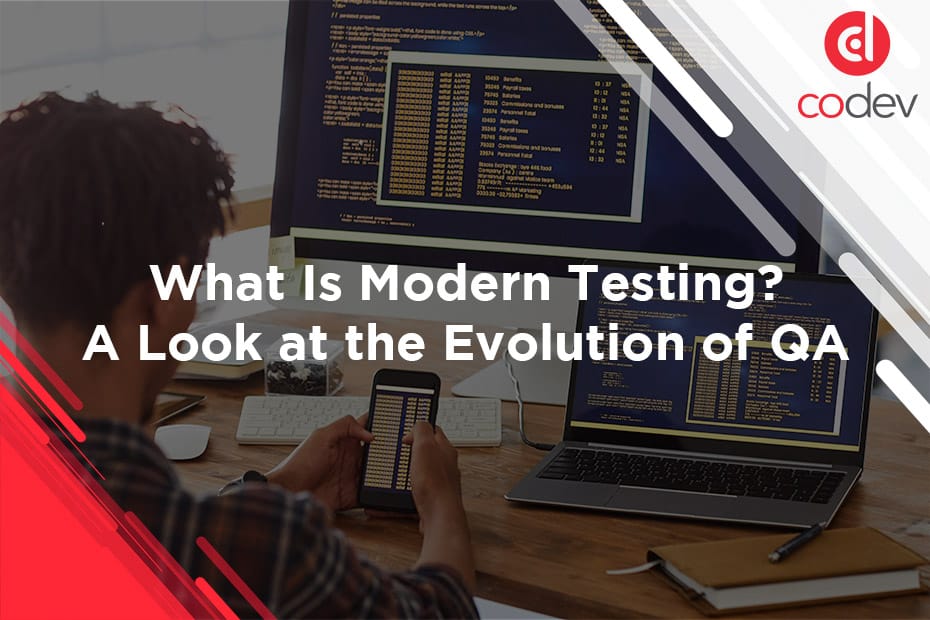 Software testing, also known as Quality Assurance (QA) has undergone a significant evolution over the past decade. However, most people still tend to perceive the QA role as merely a tester of end software products. Here we’ll take a look at how it has evolved, and why it is so much more than just testing.

When people think of software testing, they often think, “It’s testing the final software, it only has to be done at the very end.”

But there’s a lot wrong with this statement.

While this may have been true in the past, it’s definitely not what software testing is today.

Back in the days of the waterfall development cycle, there was no working software to test during the development process. It was only at the very end, when the software or a feature was completed that software testing would begin. But this proved to be quite problematic. Requirements could no longer be changed, test cases had to be meticulously planned in advance, and every action basically was reactive instead of proactive. It didn’t help the developers anticipate issues, and it didn’t help testers do their job more effectively.

Moreover, this method placed a clear separation between developers and testers. There was no overlap in responsibilities or activities whatsoever, with testers tasked solely with finding and reporting defects.

From Quality Control to Quality Assurance

All of this along with the emergence of agile methodologies prompted the evolution of software testing.

Instead of being a standalone process at the end of development, software testing became an integral part of the development process, infusing quality checks throughout it. Quality was better achieved since it was baked in from the beginning, and it became a shared responsibility between the developer and the tester.

Instead of finding and reporting defects, testers were now able to prevent defects from the start, resulting in better quality software and a higher level of user satisfaction. This meant that testers were now more effective in their roles.

Developers and testers started to share common responsibilities and activities. But while there was now a testing and development partnership, there was still another important aspect left out: operations. The separation of development and operations meant that neither could see the other’s activities, which led to information gaps between the two areas.

Covering All the Bases to Establish Modern Testing

Enter: DevOps. This was the union of development and operations, enabling for more collaboration between the two teams from software creation through to maintenance and support. With DevOps, testers were given yet another opportunity: to align themselves with development as well as operations.

Testing was no longer limited to the actual software product, but also the infrastructure in which the product would ultimately be executed. With practices such as Continuous Integration (CI, which automates the integration of code changes from various sources) and Continuous Delivery (CD, which ensures software can be reliably released at any time) becoming the standard in the development and delivery of software, testing had an additional focus. It also had to ensure the integrity of the CI/CD pipeline, environments, and infrastructure. Failure to do so meant increasing the risk of flaky environments, lengthy investigations on infrastructure issues, and overall poor development and slow delivery.

This is now the modern approach to software testing. It is no longer limited to the end of the development process, or to just the end product. It now has a much broader scope, encompassing almost the entire development process including areas of operation; ensuring speedy delivery and quality output and practices from beginning to end.

The Future of Modern Testing

While software testing, now better known as Quality Assurance or QA has certainly come a long way, there is still much more it has yet to accomplish.

It must have an even deeper development partnership in order to consistently achieve a number of things sought after by users and software development companies. These include:

Beyond these areas, there must also be an improvement in the way people, including testers themselves, view the role of QA specialists in software development.

The roles of the QA Engineer and Tester involve more than simply testing software, and are far more important than what most people think. They are crucial to quality-driven development. Those who believe that automated testing is a viable replacement for actual testers, know little of what QA testers really do and the impact they can have on software development and delivery.

QA specialists ensure quality in all areas of software development, and this involves so much more than just testing. It is a series of processes backed by the specialist’s broad knowledge and understanding of development practices; appreciation of deployment methods, environments, performance and security standards; adaptability to new technologies and ways of working; and lastly, their deep commitment to quality.

If you’re currently working on a software development project, having a QA Engineer and Tester on your team is essential. However, it can be technically difficult to find a good QA specialist. Much like when you hire a developer, you want your QA specialist to undergo a technical vetting process to ascertain their skill level and performance.

If you are unfamiliar with such a process, or need to find a QA specialist quickly to keep within your project schedule, you can trust CoDev to take care of the entire process for you. CoDev is an established offshore development outsourcing company with a tried and tested hiring process that ensures the best quality talent for your projects in the least amount of time. We’re experienced in vetting and hiring software development talent, including QA Engineers and Testers, and are careful to consider every client’s specific requirements. Learn more about our services and what we can do for you, get in touch with CoDev today.